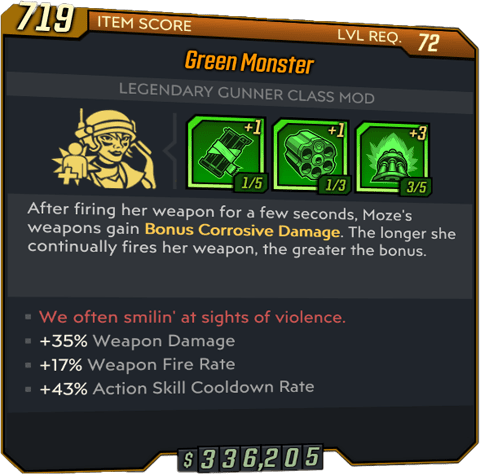 Farming Note:
‍The Green Monster Class Mod can only have +1 in the Skill "Click, Click..." instead of the expected +3.

Like other Legendary Class Mods, the Green Monster can boost each skill with up to 1, 3, or 5 additional Points. The bonus Points depend on the Skill's maximum points.

Class Mods don't have an Anointment or Mayhem Level.

Like other Legendary Class Mods, the Green Monster has 3 random Stats out of these 4 Categories.
Each stat can only appear once!

Moze gains increased Gun Damage as her magazine empties.
The less ammo there is remaining, the greater the increase.

If Moze has a COV gun equipped, she gains Gun Damage as her gun's heat increases.

Green Monster - How to Farm

Green Monster's Drop-Rates and all Sources:

Fire in the Skag Den

Fire in the Skag Den