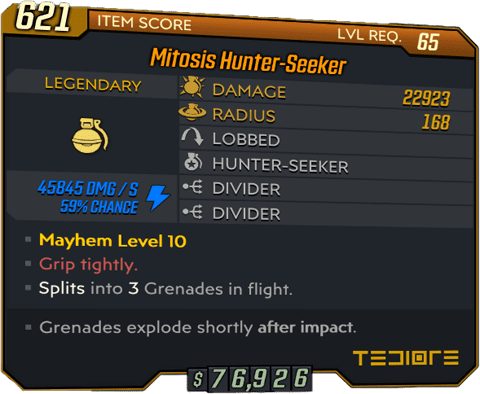 50% of Hunter Seeker grenades are Non-Elemental and each Element is equally common with 10%.

Hunter-Seeker
‍Grenade homes in on enemies and shoots at them before it explodes on impact.

How to farm: Hunter-Seeker

Unavailable items were temporarily available during a seasonal event. They might come back.

World Drops are items that drop from any suitable Loot Source in addition to their other sources.

Base Game World Drops are items that drop from any suitable Loot Source, within the DLC, in addition to their other sources.

Datamined items are not obtainable with legitimate methods.
They can only be obtained using bugs or the Cheat Engine on the PC.

Quest Reward Items in Borderlands 2 can be farmed on PC by Read-Only farming.

How to Read-Only farm:

Tip: Store the items in Claptrap's Secret Stash.
This way you can get the quest reward items multiple times since they are saved on a different SaveFile.

In Borderlands 3 Quest Reward Items are rewarded after or during a quest. After the quest is completed there are 2 ways to farm base game items:

DLC quest items can't be farmed by these methods.

Dedicated drops are items that can only be farmed at one or rarely more sources that have the item assigned to them.

External Source items are mailed to you for activities or purchases outside of the game.

This item can be bought from the Seraph Vendor in the Base Game DLC.
If the desired item is not for sale reload and try again.
Seraph Vendors sell gear in exchange for Seraph Crystals which can be obtained by killing Seraph Guardians (Invincible Bosses).

Torgue Vending Machines can be found throughout the "Mr. Torgue's Campaign of Carnage" DLC.
All gear can be purchased using Torgue Tokens which can be obtained throughout the campaign.

Legendary Gear may appear as "Item of the Day".
If the desired item is not for sale reload and try again.

More Grenades for your build