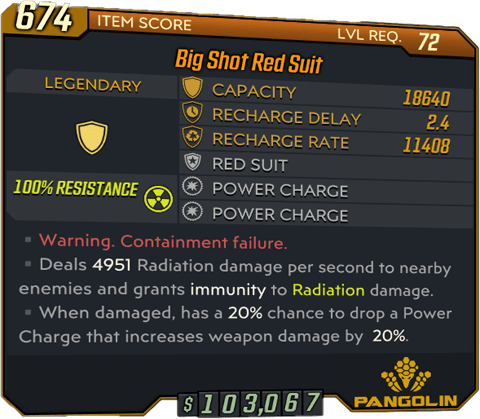 The Legendary Shield Red Suit is manufactured by Pangolin and comes from the Borderlands 3 Base Game.

The Red Suit always spawns with any combination of 2 out of these 7 Augments.
All Augments are equally common.
Each Augment can occur twice which increases its stats.

Red Suit - How to Farm

Red Suit's Drop-Rates and all Sources:

3 Epics count as legendary ingredients and may come as a result: Deadly Bloom, Supernova, Cryo Spike

In Borderlands 3 Quest Reward Items are rewarded during or after a quest.
After the quest is completed there are 2 ways to farm Quest Rewards Items:

More Shields for your build