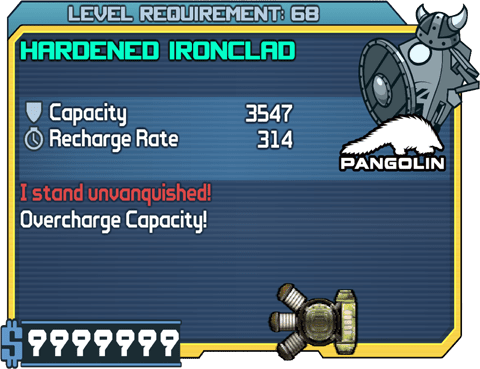 The Pearlescent Shield Ironclad is manufactured by Pangolin and comes from the Borderlands 1 General Knoxx DLC.

Has the highest Shield Capacity!

Ironclad
How to Farm

Borderlands 1 World Drops are items that drop from any suitable Loot Source, within the General Knoxx DLC, like Bosses, regular enemies, red-chests, white-chests, and vending machines.

Lilith's Catalyst and Mordecai's Scavenger Class Mod can increase the Team's Awesome Level by an insignificant amount. But it's notable for low Awesome Level Sources like chests and generic enemies.
Best Loot Sources are:

Alternative Shields for your build